Making your own Vagrant WordPress box

It had been a while since I’d played around with WordPress so I wanted to get it installed on my machine. Previously for me that would have involved downloading WordPress and setting it up in a local instance of Nginx running inside OS X, but these days I’m tending to run everything inside a virtual machine via Vagrant. Here are the steps to get that working.

You can grab the WordPress package off their site, or you can clone the Git repository if you prefer. Either way, just make sure the files are extracted into a directory. I put mine in a directory called wordpress_test, so let’s use that as an example going forward.

Start with a custom base box

Rather than using Vagrant’s default Ubuntu box, I’m using a custom base box that has Nginx and MySQL pre-installed. This avoids having to wait ages for things to install when provisioning the WordPress box, and also means you can keep the config on this WordPress box much simpler.

I’ve put this base box on GitHub, and there are details in the README on how to clone the box and make it available. The gist is:

Add a Vagrantfile inside your WordPress Directory

Alongside the WordPress files a Vagrantfile is needed to declare some basics about how the virtual machine should be set up. Create something like this at wordpress_test/Vagrantfile:

Notice that Vagrantfile calls a provisioning script, bootstrap.sh when it first boots the machine. Create that script at wordpress_test/config/vagrant/bootstrap.sh and put the following into it:

Now, we’re going to run Vagrant twice to get up and running. The first time we boot we’ll get the WordPress installer which will ask us to set up some initial stuff like the database and an admin user for the Wordpress admin panel.

All being well you’ll be able to navigate to http://192.168.50.2/ and see the WordPress installer. Set things up as you like - you can even add some test content into your new blog if you like. Once you’re happy, we’ll dump the database to a static file so that next time we provision the box we don’t have to go through the install process all over again. You can do the database dump through the command line or via Sequel Pro using the above credentials, like so: 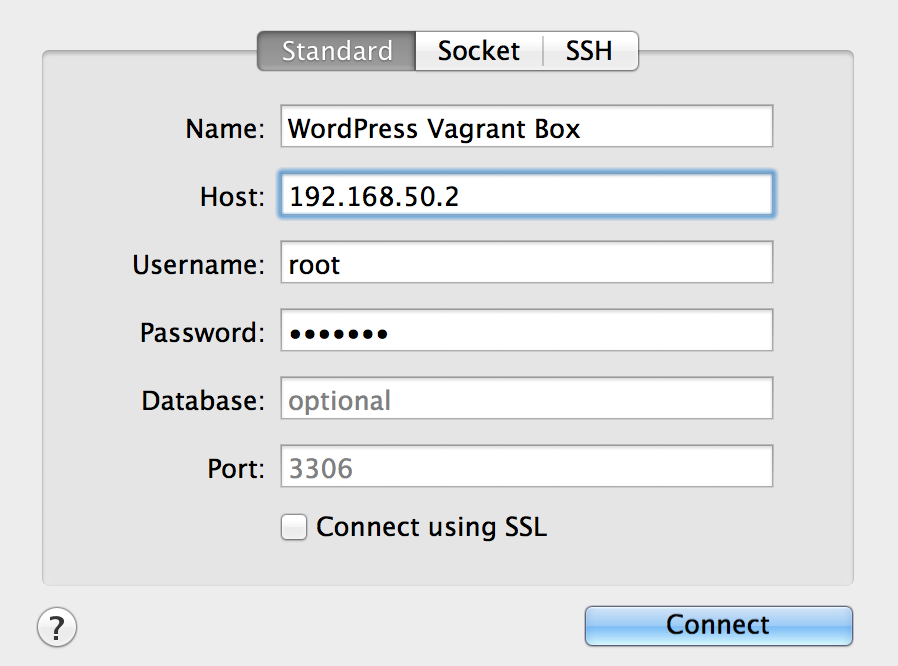 Export the database dump to wordpress_test/config/sql/database.sql, then let’s destroy the box so we can assure ourselves that everything will work as expected if ever we reprovision the box in future:

With a bit of luck everything will work like it did the first time, except this time the database will also be imported automatically.

Next: Forcing keyframes with ffmpeg